I'm a budding writer and a book lover. I'm addicted to music, series and whatever I find beautiful and inspiring. I would like to travel more ! But here I will share only my thoughts about my readings. I will try to make myself clear but please don't forget I am French ! I hope you will enjoy my blog ! 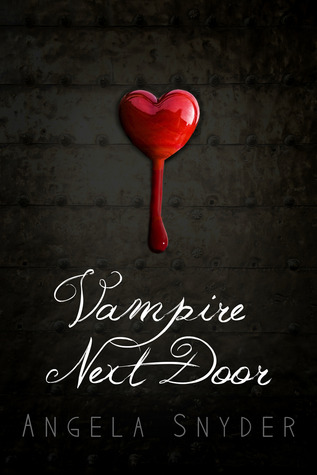 Vampire Next Door is the story of a woman left for dead who wakes up from a coma. She has no memory of her past and is called « Jane Doe » since no one came for her. Scared and broken, she quickly understands she never was alone thanks to her doctor, Jack Walker. At the begining of the book, Jane Doe is lucky and loved, and after months of being in a hospital, she finaly is happy. She had found her balance. But unfortunatly, tragedy strikes again and she is once again lost and broken. But something or should I say someone arrives and gives her something to smile for. Here he is : Sebastian Alexander, her mysterious and handsome neighbor, living next door, who seems to have some secrets of his own. Jane is falling for him but at the same time, she is confused by how this new man in her life is capable of getting her so quickly, always here when she needs someone so bad. She also starts to wonder if he is really a stranger or someone she could rely on to find out who she was before the « accident » and above all, who wants her dead.

First I have to say, I love vampire stories and movies so I was really excited to read Vampire Next Door. But maybe I should warn you, this is not a novel 100% about vampires. I mean, the way I understand and love the plot makes me think this novel is more than just about a sexy and dangerous vampire. I loved the pace of this novel, which I found was different from what I usually read, and loved the characters. This is the kind of books I'm beginning to love more and more each time I read one like Vampire Next Door. There are actions, romance ( oh yeah!), humor and suspens. It is a really an efficient writing that made my reading active and amazing. Sure, it's a slow process to get to know the main character. And I also wanted to know more about this mysterious visitor. But then characters like Jack Walker are here and we get to know Jane through his eyes. And it's something I really appreciated. Something else I enjoyed is how easy I felt close to Jane. Who wouldn't feel sad about her ? But who wouldn't want to take her place at some point too ?

Now I have to introduce the characters and it's easy when you love all of them (or all but one!)

Let's start with Jane Doe. Like I said, I felt close to her. I usually prefer when the story is told with the first person, but here it was great to know about the main character through different points of view. I could know her feelings, what she thinks and I found myself asking the same questions as she does. Jane is warm, smart and pretty. She is also brave even when she feels broken and lost. She is a survivor but that doesn't mean she doesn't need to be protected. And she absolutly needs to be !

Without saying too much, I'm happy about her journey and who she is becoming through the novel.

I have to ask : who would hate a man like Jack Walker ? Really ? He is what I'd called a golden boy. He shares some of his quality with Jane and their love is really believable. He is perfect and always wants to do what's best for everyone else. I'm sure his kindness will make you love him as much as I did. Unfortunatly, the answer to my first question isn't : no one. Too bad and too sad.

First : Wow ! Then I calm down and I can say more about this character.

Sebastian is of course mysterious, handsome in a way no human can be. I mean, he is hot but I think it's his real age that makes him actractive. Not his power or his fangs, he's more than just a sexy vampire. (I would love to share my bookshelves and a glass of whine with him too !) The way he acts, the battles he has to fight inside and his love for Jane is all I wanted from that kind of character. He is also super protective and a bit jealous. I have to say sometimes I forgot about him being a vampire. But that's because he is warm, attentive and sensitive, and sure dangerous. But I can't help it, I loved him and was not disappointed. I would have loved to know more about his story and I'm happy I got to know more about it. Maybe Angela has some anwsers for me...

Well I can't say too much about the other characters. Besides I like Jane's best friend Ashley. She is fun and sweet too.

What I found great !

So what I found great is that Vampire Next Door, like I said earlier, is not just a vampire story. There is the big question : Who wants Jane dead ? And who was she ? Is she going to get her memory back ? Some answers had to be waited for and it kept me turning the pages. It's great because, even if sometimes I guessed what was coming up, most of the time, I was blown away by the twists. Especially at the end of the book. I was like « Oh my gosh ! Please don't ! » Really intense ! I have to say, I really enjoyed the romance in this book. It wasn't too much or too sexy. Just perfect ! Actually, as a budding writer, one thought kept coming to my mind : This is the vampire story I've always wanted to write. And I'm glad I read Vampire Next Door cause there's everything I love in it. So I guess I have to thank Angela !

Well I gave 5 stars and Vampire Next Door really deserves it. But there is just one thing I didn't truly enjoyed. It's just... I wanted more ! I mean, I still want more when it's good. But with this novel, I found that sometimes things happened a bit too quickly. It's not really a bad thing because, like I said, I like it when it's efficient. For instance, I wanted to « see » Jack more. I also want to know what happens next for Jane and Sebastian. I love them so much and I would love to read an epilogue, like « Five years later ».

Besides this tiny thing, I loved all of it. I highly recommend you to read Vampire Next Door. It's a great novel with lovely and surprising characters. I read it fastly and was happy with the ending.

I hope my review convinced to buy and read Vampire Next Door. You can follow Angela Snyder on Goodreads, Twitter and through her Facebook page. She will be glad to hear about your thoughts regarding her novel. I can't wait to read another one of her books.

Thank you and enjoy your read !